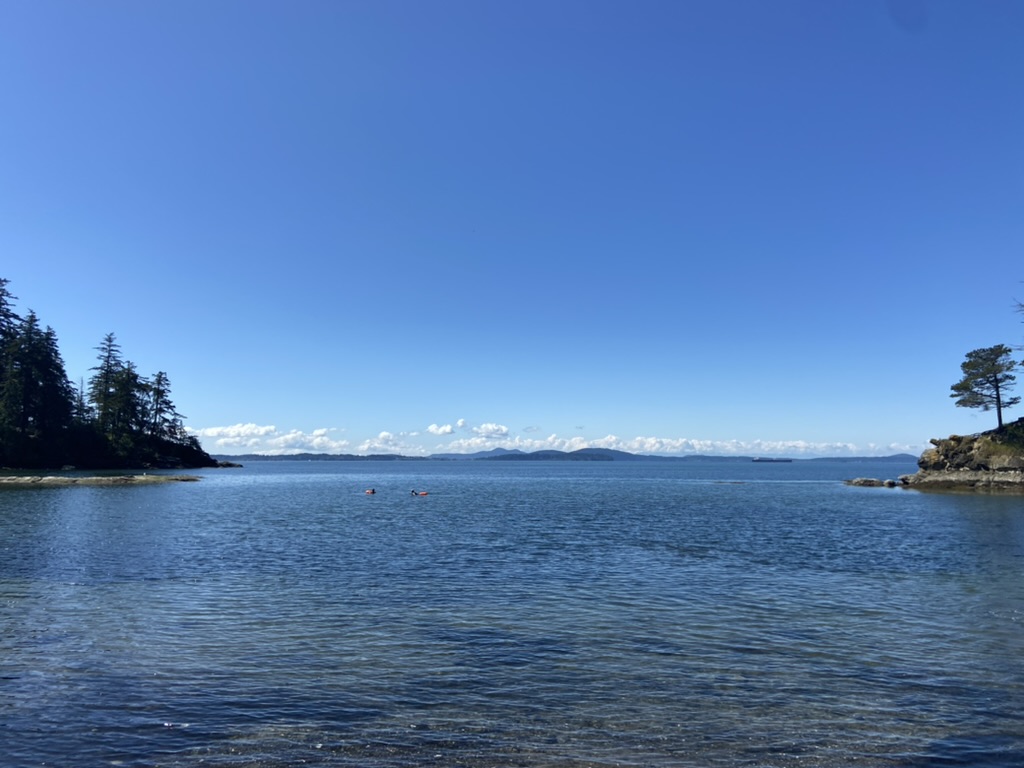 For three years, I’ve been saying that I’m going to buy a wetsuit. I’m going to swim all four seasons of the year in the lake by my house and the Puget Sound’s salty waters. I want to feel alive. I want to get out of my head, into my body, into the body of the world.

In mid 2020, apparently a lot of others wanted to start open-water swimming, too. Wetsuits were hard to find, the local open-water swimming Facebook group was full of invites—women, mostly—meeting up mid-pandemic because it was a safe way of socializing. I joined the group, posted a question about what kind of wetsuit to get. I even messaged an acquaintance in the group and asked if we could meet up once I got a wetsuit. She replied with an enthusiastic yes, but then I got overwhelmed looking for wetsuits and it never happened.

Then I decided rowing would be the thing. I left a bunch of messages for the local rowing club, and they weren’t returned. I think they were inundated—everyone wanted to get outside, burn off stress, start new hobbies, feel in control somehow.

I have a very loud story about myself that says, “Sarah, you really like to know things, but you don’t like to learn them. You don’t have enough hobbies; you don’t put yourself into uncomfortable places often enough. Over the years you have said you want to do a lot of things that you have never done—what is your problem?” Wrestling with this narrative actually feels like doing something and keeps me from jumping into the water, the rowboat, or the writing group. It’s a full-time job to manage this chorus of voices, though it’s getting softer over the years.

Tomorrow, I am going swimming in the cold spring waters of Chuckanut Bay. The woman I messaged on Facebook has now become my administrative assistant, and we started a Slack channel called “swimming.” She advised me on the right type of spring wetsuit, and I bought gloves, a buoy, and booties. We’re going together, which I learned is a best practice because of the danger of hypothermia. I do a lot of things alone, but I’m thankful this won’t be one of them.

In the morning, I’ll be with the starfish and jellyfish. I’ll be with the Dungeness crab and might see a porpoise across the bay. If I go often enough, I might see an Orca whale from time to time, and that would make every shiver worth it. Last summer, a pod swam near our boat in the San Juan Islands, and I have been drafting off it all year. In a strange way, being around them made me feel more human.

I’ve had a bout of mild depression these last few weeks, and it certainly hasn’t been helped by this week’s news. I suspect that as soon as my body hits the water, it will be pretty hard to be feel depressed, at least for a few minutes. All my energies will coalesce to keep me warm and alert. I’ll be fumbling with new gear, frustrated with it or maybe surprised that I can still move around pretty well. I’ll be deciding whether to dunk my head or not, and hopefully an eagle or two will fly overhead. There might be a few other swimmers there, and we will immediately have something to talk about— “Brr! How long have you been doing this? What are your favorite places to swim?”

I feel buried in grief lately—white supremacy, mass killings, heat maps that show which parts of the country will be hottest this summer, untimely deaths in my extended circle in the last two weeks, the war in Ukraine, rising Covid cases. Every day I remember something I heard the Buddhist climate activist Joanna Macy say—if we love the world, don’t we want to love it more as it dies?

Yes. I do want to love it. In all the ways I can. In the morning, I’ll love it by jumping into it.